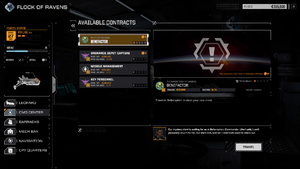 Contracts are the source of income for any mercenary company across the stars and yours is no exceptions. Contracts are taken out via the command center on your dropship and offer you the ability to earn C-bills and salvage.

Each contract is issued by one of the factions and completing it will give a boost to your standing with them. The more difficult the contract, the higher the rewards. Note, however, that each contract's terms have to be negotiated, determining your payment, salvage, and (unless dealing with independent forces) reputation gain.