Difference between revisions of "Ballistic weapons"

Ballistic weapons are familiar; they’re similar to modern guns. There are four different classes of autocannon: the AC/2​, the AC/5​, the AC/10​ and the AC/20​. The numbers indicate how powerful the weapon is; the AC/2 does comparatively light damage, but has enormous range, while the AC/20 does absolutely crushing damage (it’s the most damaging weapon in the game!) but has very short range. 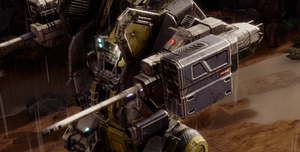 Intended for use as supporting fire at very long range, AC/2s deal moderate damage with low heat and a large ammunition count per ton. Like all Autocannon weaponry, AC/2s suffer from recoil effects from continuous fire. 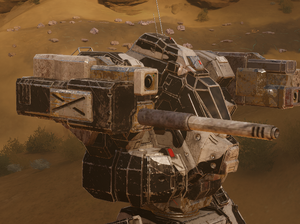 A stock AC/5 on a Blackjack.

A flexible weapon, AC/5s strike a balance between long range, power, and performance. These weapons are commonly found on medium 'Mechs as their primary source of reliable damage. Like all Autocannon weaponry, AC/5s suffer from recoil effects from continuous fire.

One of the most powerful and efficient weapons mounted in combat, AC/10s are known for their heavy damage and ability to stagger opponents. Like all Autocannon weaponry, AC/10s suffer from recoil effects from continuous fire.

The king of the battlefield in terms of raw damage, AC/20s hit harder than any other weapon. However, this comes at the expense of weight, range, and severely limited ammunition. Like all Autocannon weaponry, AC/20s suffer from recoil effects from continuous fire.

A Gauss Rifle uses electromagnetic charges to accelerate metallic rounds at extremely high speed, dealing massive damage by kinetic force alone. Unlike Autocannons, Gauss Rifles do not suffer recoil effects from firing, and their ammunition will not explode upon a Critical Hit.