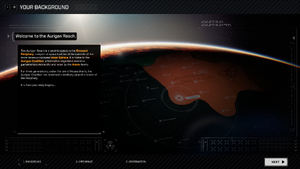 The Aurigan Reach is a specific group of about two dozen systems in the Rimward Periphery bordering the Taurian Concordat and the Capellan Confederation. The Reach is home to the Aurigan Coalition ruled by House Arano. Beyond the Reach are a large number of independent systems colloquially referred to as the Frontier.

The Aurigan Coalition is an interstellar state in the Aurigan Reach area of the Rimward Periphery bordering both Capellan and Taurian space. Growing out of a trade partnership in the mid-29th century, the Aurigan Coalition was formally established in 2910 by High Lady Keona Arano. In the past hundred years, the Coalition has grown from four systems to a total of 23.

The Aurigan Coalition was created from the worlds of the Rimward Trade Partnership. The most powerful families of those worlds became the Founding Houses of the new Coalition. At the time of the Coalition's inception, the Founding Houses included House Arano of Coromodir VI, House Madeira of Guldra, House Parata of Tyrlon, House Gallas of Itrom, House Karosas of Smithon, House Decimis of Panzyr, and House Espinosa of Coromodir V.

Although once prosperous, the Reach has slid into decline as the Inner Sphere and the Periphery suffered the continued fallout of the Succession Wars. The death of Lord Tamati Arano II triggers a coup d'etat by Lord Santiago Espinosa, his brother-in-law, who believes that only the transformation of the Coalition into a Directorate and replacing the slow-moving Council of Founding Houses with a centralized structure ruled by a single, powerful leader. Lady Kamea Arano, who refused to entertain his reforms, is forced into exile, hounded by her uncle's assassins...